As of April 2021, the MAREWIND consortium has started working on WP3 predictive modelling for preventive maintenance of wind energy. This part of the work plan focuses on the development of technologies for monitoring the structural health status of wind offshore facilities. It also develops mathematical models aimed to representing different key aspects related to the durability and maintenance of offshore structures and materials. During the first months, the involved partners led by IDENER have set the bases for the future work.

INEGI will develop a blade monitoring technology that uses cameras mounted onto drones to acquire images (visible and infrared) of the rotating blades. The images will be then digitally analysed for the detection of sub-surface voids, delamination and displacements. INEGI has already designed a lab-scale setup and selected equipment to be used. It also features cameras, synchronization controllers, drone and a representative rotating blade. INEGI will use this lab setup during the upcoming months to test and analyse different configurations of the cameras. That also includes “floating” cameras that will simulate the operation of a camera mounted in a drone.

MAREWIND consortium will be also developing monitoring technologies based on fibre optic sensors. The sensors will be embedded into representative concrete and blade components to build a remote real-time sensing system, able to early detect diseases or damages.

Firstly, CETMA will focus on the installation of sensors into concrete-based components, while INEGI will focus on blade composite elements. CETMA already started the preliminary design of the sensor system, paying special attention to the characteristics and size of the prototypes that will be sensorized in the project.

Likewise, INEGI started the design of the sensor system by defining the sensor placement and equipment for each parameter of assessment. During the following months, CETMA and INEGI will perform the first lab-scale trials of the designed systems.

Furthermore, INEGI has started working on the simulations of the water column around the gravity-based structure (GBS) by using computational fluid dynamics. The simulations involved numerical modelling of the flow at the bottom of the sea influenced by waves and currents.

The modelling procedure for such a complex and vast fluid domain was divided in two parts to reduce considerably the computational cost of a complete Computational fluid dynamics 3D model with complex geometries.

The experts obtained results from the hydrodynamics analysis that was performed using CFD. The collected outputs were pressure maps for each selected case in the transient form. In order to illustrate the results, a static pressure contour for sea state 50 m of depth and current of 1 m/s is displayed is displayed in Figure 2.

RINA will develop a finite element computational model of the reinforced fibre composite developed in the MAREWIND project. The overall model will interconnect three successive sub-models at different scales of the composite and will allow the simulation of the mechanical behaviour of the composite blades.

In the first step of the task, RINA has started the setup of a mathematical model. The model should be of a suitable representative volume element (RVE) of an elementary composite specimen, considering the constituent materials (matrix and fibres) and their combination (Figure 3).

In the upcoming months, RINA will implement this numerical model with the project data. Thus,  allowing the calculation of the properties of an equivalent homogeneous material using the known properties of its base materials.

During the first months, IDENER started the construction of a corrosion mathematical model by defining a first simple scenario with a single anticorrosion coating layer (sacrificial layer). The approach selected for the model will focus on the description of the dynamics of the interface between the coating and electrolyte, which will be under the effects of corrosion. Once the computational implementation of this first approximation is finished, the complexity of the model will be gradually increased by including the other layers of the anticorrosion protection, such as the self-healing layer.

The second part of the MAREWIND work plan WP2 Fabrication and testing elements individually has started in March 2021 and is led by Lurederra. Within the scope of work is to formulate and optimize at a lab-scale different material. The consortium will improve corrosion protection, fouling prevention, blade’s coating protection, blade’s composites optimisation, recycling and concrete enhancement. The partners involved in this WP will also oversee the synthesis and selection of new concrete materials and testing/aging at lab scale. The task is still on going and will be active until M18, May 2022.

END_OF_DOCUMENT_TOKEN_TO_BE_REPLACED

During the first 3 months of the beginning of the project TECNAN along with the other partners completed the very first part of the work plan. WP1 Defining the requirements provides an overview of the characteristics of new materials and monitoring procedures. A risk mitigation plan was also created for the project lifespan. In addition, the consortium also prepared a roadmap for the implementation of all demonstration sites, as well as identified  the conditions and required equipment for each of them.

In MAREWIND project the consortium will develop project technologies for anti-corrosion coatings for metallic parts and fastening elements, as well as anti-fouling coatings, new composites for blades, anti-erosion coatings for the blades and new high-performance concrete materials. These technologies will be implemented and tested on different demonstration sites based on the defined requirements for material and testing procedures.

In  the very first step of WP1, TECNAN defined the technical characteristics of each new material. The materials’ properties are required in order to make experimental protocols and detailed analysis. They are also needed for quantification of the increased materials lifetime performance which is related to the target costs defined by the end-users. Therefore, TECNAN collected current market references about the characteristics durability, costs and main properties on variety of groups materials. That includes corrosion protection, fouling prevention, blades protection, blade’s composites optimisation and concrete enhancement.

Furthermore, the consortium defined the main inputs and outputs for the mathematical models and simulations. In addition, the respective partners will develop structural Health Monitoring (SHM) using many different techniques e.g., non-contact high-speed full-field measurements as digital image correlation (DIC) and thermography. These methods will be used to overcome the accessibility to offshore locations. In addition, the requirements of the models development according to Gravity-based structure (GBS), blade mechanical behavior modelling, and corrosion modelling were also considered.

Relevant standards and regulations related to the MAREWIND project developments have been also compiled. Making an early identification of the necessary requisites to deliver MAREWIND project activities will assure post market implementation. Additionally, the early identification of standards will also allow the consortium to recognise any potential gaps.

In the next phase of this WP, EDF presented all demonstration sites available to the different partner organisation. This was combined with a description of the MAREWIND technologies to match the different sites.

A final detailed definition of the tests on each site will be made in next phase of the project in WP2 and WP4. Additional tests will be made in the trials that are to be performed in WP5.

In the final phase of WP1, the consortium had to identify any potential risks that could happen during the project lifetime. Based on that they had establish procedures and actions for risk mitigation. The consortium will implement the respective measures and actions in case of deviations concerning timeframe, technical parameters and/or key performance indicators.

During the 1-day online session, all partners presented the work done for each of the work packages and their main achievements. Members of the consortium discussed the next significant milestones and deliverables that are to come. In addition, the consortium also detailly presented the planned actions in short term. By the end of the meeting, the project coordinator has concluded that the project and work packages are going as foreseen with no delays.

The consortium is preparing its first newsletter, so stay tuned for more detailed project progress. You can subscribe for the latest MAREWIND news and events, here.

The next consortium meeting is scheduled in November 2021 when first year of the project would be achieved. For now the meeting will be held online again.

Have you ever wondered why wind energy is so important? Nowadays, it is the most efficient technology to produce clean power for several industries and electricity for the people in a safe and environmentally sustainable way.

These benefits motivate European governments to look for investment and further development in the wind energy sector as key Renewable Energy Source (RES). In this context, how is wind energy produced?

What is wind energy?

Wind energy is actually a by-product of the sun. The sun’s uneven heating of the atmosphere, the earth’s irregular surfaces (mountains and valleys), and the planet’s revolution around the sun all combine to create wind. Since wind is in plentiful supply, it’s  sustainable resource for as long as the sun’s rays heat the planet.

What is wind turbine ?

A wind turbine captures the kinetic energy from the wind and converts it into mechanical power or simply electricity. It produces energy in a safe and environmentally sustainable way.

There are 2 types of wind turbines:

How is the wind turbine work?

When wind flows across the blade, the air pressure on one side of the blade decreases. The difference in air pressure across the two sides of the blade creates both lift and drag. As the force of the lift is stronger than the drag, it makes the rotor to spin. Then, the rotor connects to the generator and speed up the rotation. This creates electricity.

Figure 2: How does a wind turbine work?

What is wind farms?

A wind farm is a group of wind turbines that produce large amounts of electricity. Its aim is to deliver power to the electrical grid. Wind farms can be placed on land (onshore) or fixed at the sea (offshore). Offshore wind farms can even have floating turbines in deep waters. 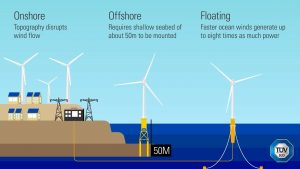 END_OF_DOCUMENT_TOKEN_TO_BE_REPLACED

This project has received funding from the European Union’s Horizon 2020 research and innovation programme under grant agreement No 952960.

GET IN TOUCH WITH US

Have a question or feedback
about MAREWIND?

Subscribe to receive the MAREWIND newsletters with latest news and events.